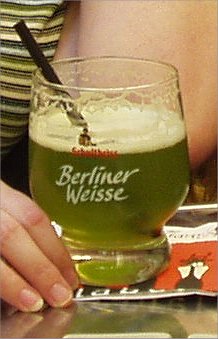 Famously referred to by Napoleon's soldiers as the "Champagne of the North," Berliner Weisse is a sour, wheat-based, effervescent, low-alcohol beer traditionally brewed and drunk in Berlin, Germany. Berliner Weisse gets its trademark sourness from lactobacillus.

Berliner Weisse is traditionally drunk out of goblet-style schooner glass. To counteract the sourness, it is often served "mit Schuss", meaning with a shot of flavored syrup added by the bartender or drinker, that changes the flavor and color of the beer.

Since the late 70s, a straw is often added to the glass, as a result of a marketing campaign run by Schultheiss. Traditionalists insist this wrong.

With minor variations, Berliner Weisse is a single style as it leaves the brewery. However, the syrup, or "Schuss", used, changes the taste and color of the final beer. Common flavors are:

Woodruff syrup, or "Waldmeistersirup", gives the beer a herbal character at low doses and a somewhat medicinal taste at a higher dose. It also gives the beer a distinctive greenish tint, and Berliner Weisse with woodruff is sometimes called "grün", or "green".

Raspberry syrup, or "Himbeersirup", gives the beer a sweet fruit character and a red tint, and is sometimes called "rot" or "red".

Less common than woodruff or raspberry, but still traditional, lemon syrup, or "Zitronensirup", gives the beer a bright "gelb" or yellow color.

In Berlin, Berliner Weisse is almost always served with syrup. However, some non-German bars or restaurants that carry bottled Berliner Weisse may not have syrup available, and some sour beer fans actually prefer the sour, tart taste of a Berliner Weisse "ohne Sirup". Some Berliners drink their Weisse "mit Strippe", which means adding a clear liquor like "Korn" or "Kümmel".

Berliner Weisse is traditionally brewed with a very different process than for any other beer style. A home brewer will probably get the best result using the traditional method.

In traditional Berliner Weisse, the lactic acid fermentation is carried out by the lactic acid bacteria that already inhabit the raw grain. This is possible because the wort is not boiled during the brewing process.

To approximate the traditional method at home:

1. Add your hops to the mash tun. First wort hopping may be trendy, but it's also traditional; since the wort will never be boiled, this is the source of all of the hop character in a traditional Berliner Weisse. In the original process, hops are boiled with the first decoction instead of adding them to the mash tun.

2. Decoction mash. Since the entire wort volume isn't boiled, it's important to boil a decoction during mashing. This will drive off some DMS and isomerize some hop acids. In contrast to regular decoctions, the liquid portion of the mash is decocted, not the solids. This makes this process in effect a turbid mashing. Your grist should consist of pale barley malt or Pilsner malt, with a third to a half wheat malt.

3. Sparge as normal, except that instead of lautering into your brew kettle, you can lauter directly into the fermenter. Cautious natures might want to boil the wort to kill of wild bacteria, but this should not exceed 10 minutes. Longer boils make the job of the lactic acid bacteria harder.

4. Pitch. Traditionally, a symbiotic mixture of yeast and lactic acid bacteria was harvested during primary fermentation and used for pitching the next batch. These days, most brewers pitch both an ale yeast and a lactic culture in order to better control the fermentation. Use a clean German ale yeast, such as a Kölsch or Alt yeast, and not a Weizen yeast. The bacteria should be Lactobacillus Brevis, but since these tend to be hard to get, a lot of homebrewers use Lactobacillus Delbrueckii. Traditional Berliner Weisse also uses Brettanomyces Bruxellensis, pitch this after primary fermentation.

5. Bottle condition. After a primary fermentation of about 5 days, add about 10% fresh wort or an equivalent amount of extract, and fill into bottles. These need at least three months of storage, to allow the specific flavor profile to develop.

While the traditional method gives the best results, there are other ways to add a sour or lactic character to the beer, while still performing a more traditional boil. These include:

Both the BJCP and GABF style guidelines recognize this style.