Whirpooling employs 2 methods of separating the trub from the wort. The first one is sedimentation, which means the trub will sink to the bottom when left alone. The second one is centrifugal force which forces the trub into the center of the pot. If both methods are used, the trub will be collected in a nice trub-cone in the center of the pot. This is the main trub separation technique that is used in commercial breweries before the wort is chilled. In a home brewing set-up, whirlpooling can be used before or after the wort is chilled. The latter also allows for the partial removal of cold break before the wort is transfered to the fermenter.

While sedimentation alone would work, the trub would thus be evenly spread on the bottom of the pot, preventing you from siphoning as low as you could if the trub was collected in a cone.

These are the steps for using whirlpooling after chilling the wort. 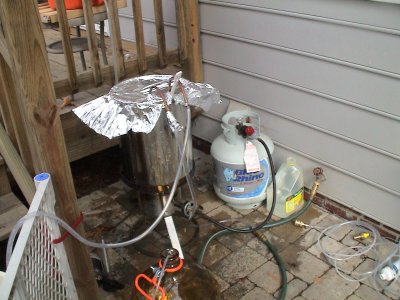 The wort is chilled with an immersion chiller. Note that the spoon has been left in the boil which sanitizes it for later use.

Bring the wort into rotation 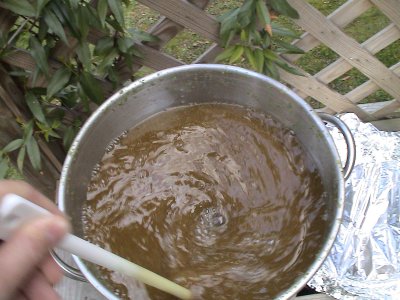 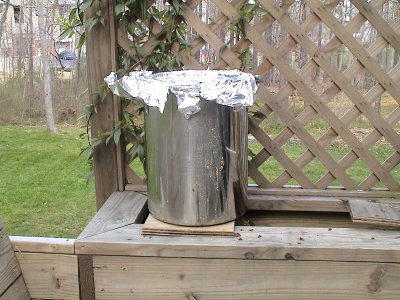 The wort needs to rest for at least 20-30 min. Make sure it is covered. Now is also a good time to sanitize the racking and fermentation equipment.

Rack to the fermenter 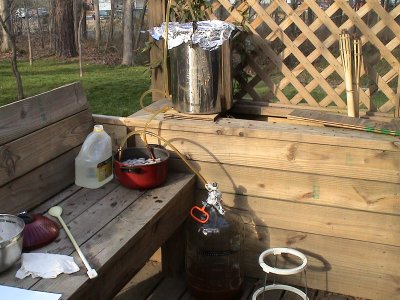 Now that the trub has settled enough the wort can be racked to a fermenter. The set-up shown here is more complicated than necessary as a post chiller has been added to get the wort temperature below 60*F (15*C). This chiller is coiled copper tubing in an ice bath.

When the racking cane is initially put in, it should not reach all the way to the bottom to avoid an early disturbance of the trub cone. As the wort level sinks the end of the racking cane can be lowered further. The siphon can be started with an auto siphon or even simpler with the mouth on a sanitized turkey baster that is quickly removed from the end of the hose as soon as the wort starts flowing.

If you are using a pot with a spigot, the spigot will have to sit higher than the trub for this to work.

As the wort level drops 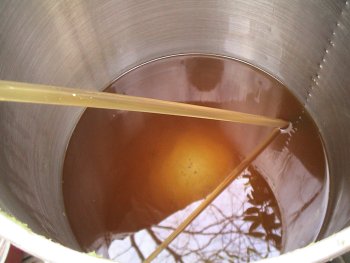 As the wort level reaches the bottom and you peek into the pot you start seeing the top of the trub cone. This cone will slowly spread as the wort level drops further. And when trub starts to be sucked up, it is time to stop the flow. 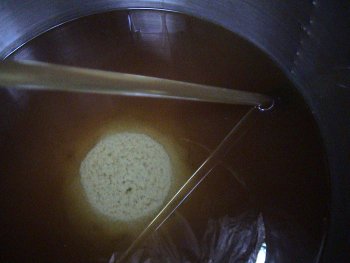 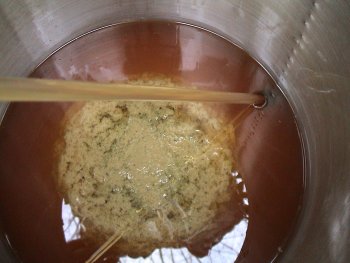 Collecting the wort from the trub 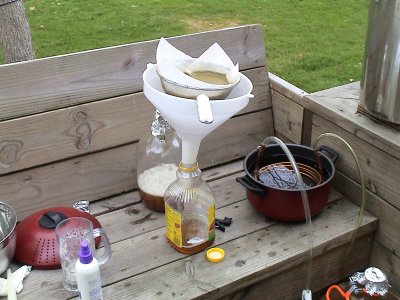 Since there will be a considerable amount of wort left in the trub it makes sense to collect it. If it is not needed for the primary fermentation (e.g. the post boil volume was lager than the volume that goes into the primary fermenter) there is no need to maintain sanitary conditions for this collection. A large funnel and paper towels work very well for filtering the wort from the trub-slush. Keep this wort frozen and use it for future starters or Kraeusening. But make sure it is boiled before use. If you have a pressure canner you can also pressure can the wort in Mason Jars. 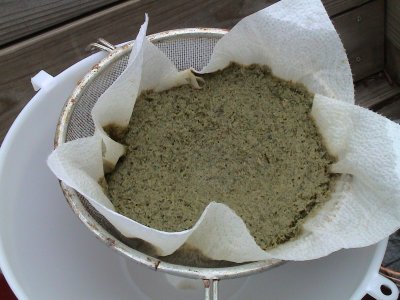 This is the left over trub; a mix of hops, hot break and cold break 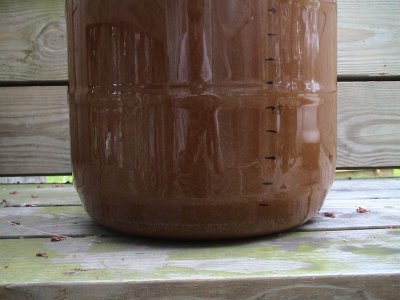 This is the result: very little break material in the primary fermenter, which will make for easier yeast harvesting and a cleaner beer.

As mentioned earlier, whirlpooling can also be used before the wort is chilled. In this case the wort is chilled on the way to the fermenter by the use of a counterflow or plate chiller. It should be noted that all the cold break will end up in the primary fermenter. Cold break in the primary is not as concerning as hot break or hop material. There is however a concern regarding DMS. Since DMS is still formed as long as the wort is hot and its precurser (SMM) is present such DMS formation happens while the wort is resting in the whirlpool. Unlike in a boil, this DMS is not driven off and remains in the beer. This is especially a concern for beers made from very lightly kilned malts (Pilsner for example) which contain higher levels of SMM than darker kilned malts (Munich for example). If you are using a counterflow chiller to chill your wort and you are experiencing a DMS off-flavor in your beer, you may want to boil for longer or use an immersion chiller.

How does it work: Whirlpool dynamics

Why does the Whirlpool work the way it does? Shouldn't the centrifugal force move the trub to the outside and not to center of the pot?

Because of the rotation of the wort, the wort is forced outward against the wall of the pot. This results in a pressure gradient, with pressure being lowest in the center and highest near the walls. Due to the friction between the bottom of the pot and the rotating wort, the wort closer to the bottom will not rotate as fast as the wort further up, and its pressure gradient will be less. The result is a spriraling inward motion of wort close to the bottom, which is "sucked" into the center of the pot and is then forced outward again.

Friction on the wall and bottom of the pot causes the rotation to slow down. With that, the inward current along the bottom gets slower as well. It is soon only able to move the break material into the center but not able to lift it up - and thus the characteristic trub cone forms.

Since cold break is very fine, it is not really affected by the whirlpooling. Some settling of that material to the bottom occurs during the rest time.