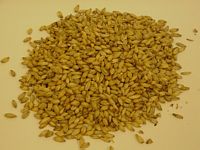 Malted grain, usually barley, along with water, yeast, and hops, is one of the four basic ingredients of beer. Malt, along with fermentable adjuncts, provide the sugar which the yeast uses to create carbon dioxide and alcohol out of the wort.

A general overview of the characteristics of common malts can be seen in the Malts Chart.

Grain is malted by allowing the grain to germinate for a short time, then applying heat to stop the germination. However, there are many variations on this basic structure that result in very different products.

While any grain can be malted, barley malt is the most common malt used in beer. Malted barley contains a high percentage of starches, enzymes to convert the starches into sugars, and a husk that prevents the grain from compacting into a big sticky mess during mashing. However, wheat malt, rye malt, and oat malt are also commonly available to homebrewers, and other specialty malts such as spelt malt are sometimes used by commercial brewers and may be available to homebrewers or can be created at home.

Malted grain is also used in distilling and in food production. Because requirements and manufacturing processes differ, beer should be brewed only with malt that was created specifically for brewing.

The defining characteristic of malted grain is that the grain is first allowed to germinate, or sprout. The maltster begins the germination process by steeping the grain in water to hydrate it. This triggers the grain kernels to begin sprouting. Once the germination has begun, the grain is moved to a malting floor, which allows the maltster to control the humidity and temperature and prevents the heat created by germination from building up in the grain.

The malt is allowed to germinate until enough enzymes are created to convert the starch in the grain to sugar, a process known as modification. The modified, sprouted malt is known as green malt.

Germination is key to the malting process; therefore, professional maltsters source their grains with a minimum germination of 98%. Only unprocessed barley, which has not had the husk removed, will germinate; "pearl barley" or other husked, processed grains commonly available in supermarkets are not suitable for malting. The chaff should be removed from barley before malting.

After germination, the malt must be heated to stop the germination process. For most malts, this is done in a kiln, where the malt is dried and cured to stop the growth of the barley (or other grain) shoots. The shoots are then removed and may be sold on as animal feed.

Depending on the temperature, time, and humidity in the curing, different styles of malts can be created. While most malts are kilned, the term kilned malt usually refers to high-kilned malts such as Munich malt or Vienna malt, which are kilned longer and at higher temperatures to create darker colors and stronger flavors.

Crystal malt, also known as caramel malt or by a number of other trade names, is not kilned; instead, the green malt is heated in a high-moisture environment until the enzymes present in the green malt convert the grain's starch to sugar. This process is sometimes called stewing, and the chemical conversion is fundamentally the same as what happens in the mash. Each grain of a stewed malt has basically been mashed inside its hull. The malt is then cured to render it shelf stable, at which time the interior of the grain hardens into a crystalline substance composed mostly of sugar.

Because it has already been converted in the equivalent of a mash, most crystal malt (except for the very lightest, least stewed versions) can be used in extract brewing without having to be mashed by the homebrewer.

Green, cured, or crystal malt can also be treated with specialty processes to impart different flavors to the finished product. Examples are:

Malt can be split into two main types, base malts that make up the bulk of the fermentables in the wort and specialty malts that are used to add character to the wort.

The resulting sweet liquid from the mashing process is called wort. Unlike specialty malts, base malts must be mashed in order to convert the starches into sugars capable of being consumed by yeast.

This category has the following 3 subcategories, out of 3 total.

The following 60 pages are in this category, out of 60 total.