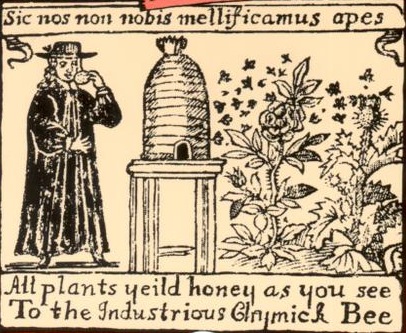 Mead is a fermented beverage made from honey. It generally has a higher alcohol content than beer, usually 10%-18%.

The first meads were most likely made simply by taking honey and water and letting them ferment with the naturally occurring yeasts found in the honey. Evidence of early meads has been found in Egypt and on the island of Crete, and it was drunk in Greece throughout the Golden Age. In many early cultures, bee goddesses held central roles in the pantheon, and many have postulated that this was because of the intoxicating effects of mead harvested from local bee hives.

Mead retained its place of honor as a highly valued drink in many cultures until the introduction of wine. As wine became a mark of wealth and prestige, many lords began turning from the consumption of mead to wine. The peasantry continued to enjoy mead, as it could be easily made from ingredients they could get their hands on and didn’t require special storage. Over time, however, beer replaced mead in the lives of the commoners, and mead became a drink set aside for special occasions.

Many people trace the English word honeymoon to a practice of fathers to supply their daughters with enough mead to last a month as a dowry. Drinking this mead throughout the first month of marriage was meant to ensure that the firstborn child would be a male. Other holidays, such as the Yule festivals, also included drinking mead as part of the festivities.

Mead is still a regular part of the Ethiopian tradition, where it is known as T'ej. Ethiopian mead has the bark of a plant called gesho added to it, giving it a somewhat hop-like taste and making it similar to the beer-like mead known as braggot. Ethiopian mead varies in alcohol content and sweetness, with some being quite potent, and others, such as the variety known as berz, having a low alcohol content.

Mead is also seeing a large resurgence in the modern world as well. Sparked to a large degree by interest in making mead by amateur brewers across the globe, the taste for mead is growing.

Mead is classified into different styles based on the ingredients used to make the mead. Mead is usually divided into several styles; light traditional, medium, sweet dessert, and sparkling. In addition, Mead is also categorized on whether it is sweet, or dry (little to no residual sugar).

In addition to the various types of mead listed above, several variations exist (listed below) that increase the complexity of Mead immeasurably.

Mead is made by adding water to honey, leaving an unfermented mixture of two to four pounds of honey per gallon of mead, dictated by whether the meadmaker wants a dry or sweet mead, or somewhere in between. Spices are frequently, but not always, used. Choosing different varieties of honey is frequently enough to impart a flavor to the mead with no need for outside assistance.

Traditional mead is generally made with around 15-20 lbs of honey per five gallons; these are the heavy, sometimes sweet drinks people think of when mead comes to mind. A more modern style is the quick mead, which uses closer to 7 lbs per five gallons. Quick meads are dry and tend to be champagne-like, often with effervescence to match. They also ferment in a short time (weeks vs. months), hence their name.

Honey is nearly pure sugars, with very few nutrients; furthermore, honey mixed with water produces a must with a pH that is not ideal for mead fermentation (as opposed to malted & mashed barley, which does come out just about right for beermaking). While it is possible to make a mead from honey, water, and yeast alone, most often things are added to it. Yeast nutrient (dead yeast cells) are often added to provide nutrients for the yeast. Fruit will also provide some nutrients. Adding spices will give the must an acidity to help achieve an ideal pH. Any or all of those might be used in any particular batch.

This category has the following 6 subcategories, out of 6 total.

The following 70 pages are in this category, out of 70 total.